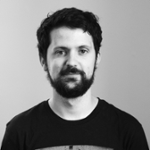 Matt Vesely is a South Australian writer/director. He works with award winning creative collective Closer Productions. Often combining his love of science fiction with a sincere view of human relationships, Matt has directed a number of successful shorts and worked as a writer across TV & film.

Matt has worked in writers’ rooms with Closer Productions, Matchbox Pictures, Bunya Productions, the ABC and SBS. He was a part of the writing team for the ABC’s flagship iView series, the post-apocalyptic sci-fi WASTELANDER PANDA, and wrote an episode and was a staff writer across the entirety of Closer’s award-winning comic drama for ABC, FUCKING ADELAIDE. In 2014, Matt was the recipient of the Colin Thiele Scholarship for Creative Writing. In 2018, his feature script OVERHEATER – a dystopian romantic comedy – was shortlisted for the Australian Writer’s Guild’s John Hinde Award for best unproduced science fiction screenplay.

Matt continues to lead Closer’s writers’ rooms and develop his own television projects, including a series based on OVERHEATER, supported by Screen Australia and the South Australian Film Corporation. SYSTEM ERROR, his new proof of concept short for OVERHEATER, was selected to have its world premiere at the prestigious Tribeca Film Festival in New York.